We had been to the inspiring Warrumbungles in the north east of NSW several times however each of these the weather had other plans for us. Our first visit to this wonderful spot many moons ago we had planned on an overnight hike with which the Warrumbungle National Park in synonymous. As we arrived that time the heavens opened and did not let up. Following a quick recon of the parks’ main facilities we decided to head back into Coonabarabran for accommodation. The next morning with the rain continuing to fall we made the decision to hightail it north just making it through to Moree before the highway was closed due to flooding. We did however spend time soaking in the hot artesian spas that the town is renowned for. Each and every other time we have attempted to visit or been passing through the area the weather gods have had the same idea so we were yet to embrace what the Warrumbungles has to offer. 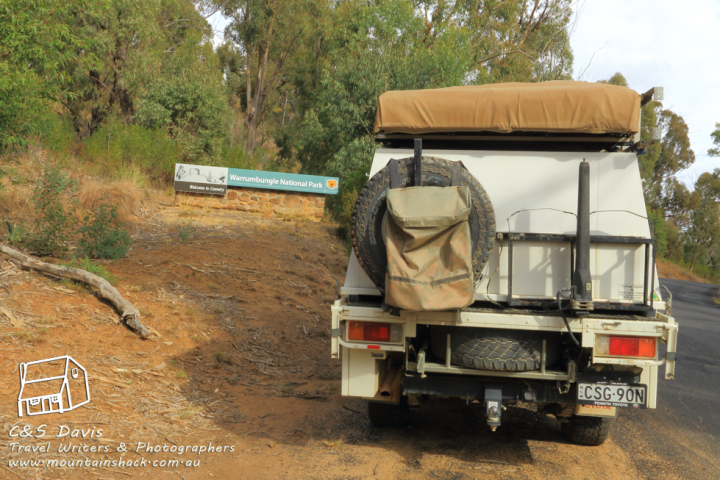 With a few days up our sleeve we were hoping that was all about to change. Arriving late afternoon into Coonabarabran we picked up supplies and after spending a night camped in one of the local caravan parks and having a hearty pub meal we set off the next morning heading into the prehistoric landscape known as the Warrumbungles. Back in 2013 a massive wildfire tore through the park changing its landscape forever, however nature is an amazing force and the park is slowing recovering from that devastating January. The road into the park is sealed and on the way in you get glimpses of its giant tors with such impressive names as The Breadknife,  Belougery Split Rock, Belougery  Spire, Lughe’s Throne and Crater Bluff to name but a few. Once within the park boundary coming from the east Whitegum Lookout is a worthwhile spot giving a magnificent overview of the rugged landscape. This is one of the easiest walks in the park and is even wheelchair friendly.

Waruumbungle National Park is a bushwalkers and hikers heaven, just be aware that many of the walks are of a steep nature and require a moderate level of fitness but it is the only way to truly embrace what this place has to offer.

Due to time constraints we tackled only two of the walks on this trip here. Tara cave heads off from the site of the old Woolshed which was unfortunately destroyed in the 2013 fires climbing the escarpment to an ancient aboriginal rock shelter complete with grinding grooves. Even though a steep climb the views from the ridge are breathtaking. 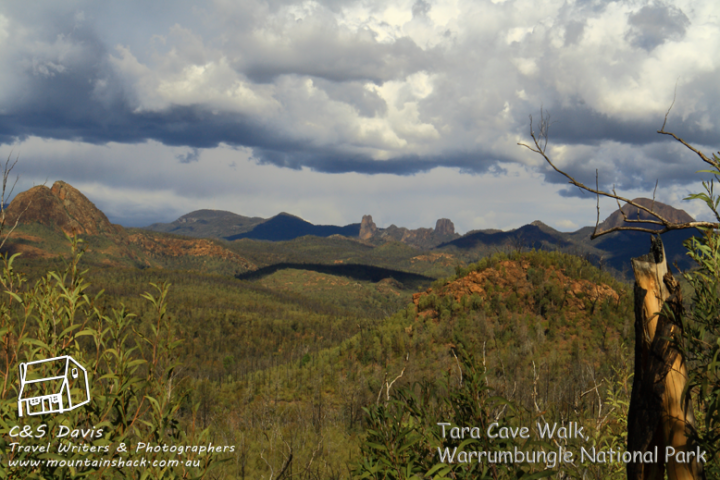 The second hike we attempted was the Belougery Split Rock Circuit. A very steep and rough circuit track that circumnavigates this impressive rock formation that is visible from much of the surrounding valley. For those that are keen there is a steep rock scramble not for the feint hearted to the summit off the 4.6km circuit. Even though it gets the heart pumping the views along the way are more than rewarding.

Spending a couple nights in the well laid out Camp Blackman (fees payable at the information centre)  which is complete with hot showers, sheer bliss after a days hiking, it was all too soon time to head off. Thanking the weather gods for a couple fine sunny days and starlit nights we ventured north into an area that we had been past on numerous occasions but never had the time to explore. That was all about to change. 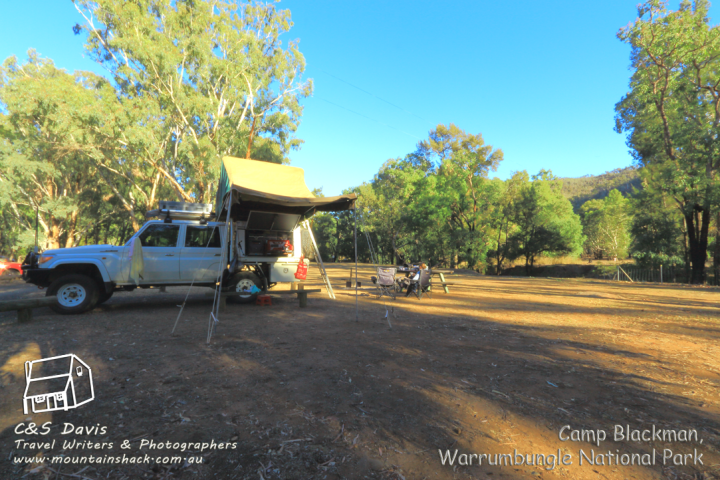 The famed Pilliga Scrub encompassing many square kilometres and made up of state forest, nature reserve and national park is a vast woodland area that is well worth taking the time to explore.

Heading north from the tiny hamlet of Baradine we followed the signs to the intriguing Sculptures in the Scrub. Located within Timmallallie National Park. Along the escarpment of Dandry Gorge with the Pilliga Scrub these award winning sculptures are a sight to behold and give an interesting insight into the local Aboriginal culture and history. An easy grade walking track leads past the sculptures with a circuit walk possible back through through the gorge. There is a picnic and separate camping area at the start of the walk, a great spot to throw down the swag for night. After spending a relaxing if not blustery night at Dandry Gorge it was time to explore the Pilliga. First stop was the Salt Caves once again within Timallalie National Park. There is a lookout tower here well worth the climb with outstanding views across the vast Pilliga Scrub along with an excellent picnic and separate camping area. 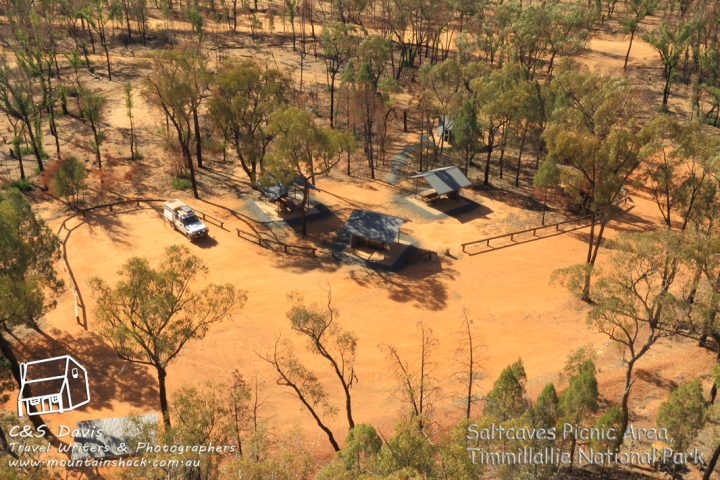 Following morning tea we sauntered along the main forest drive checking out several more bush campsites including Schwagers Bore, Rocky Creek Mill (the site of an old sawmill with rusting relics scattered through the area) and The Aloes which was once said to contain a koala colony nearby although none were spotted during our visit here. 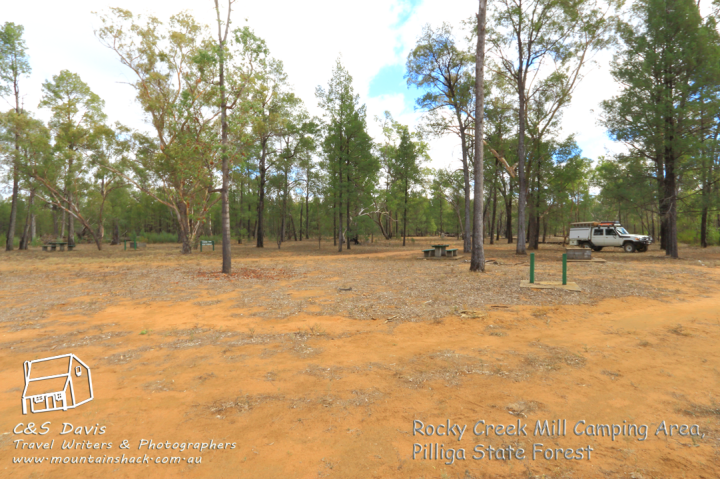 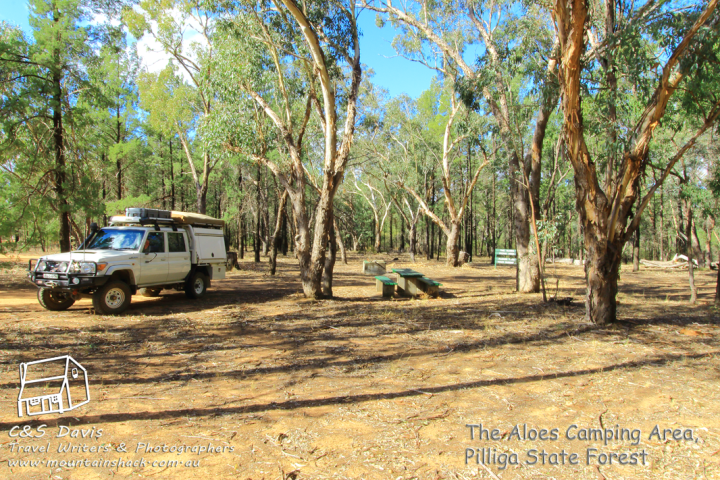 Following a pleasant morning exploring there was one more site to check out that we had discovered by chatting to another couple whilst camped at Dandry Gorge. There is apparently some amazing sandstone caves not far off the Newell Highway, so a hunting we went. Without too much difficulty we drove down a dirt track to find a parking area complete with information sign and walking track. It is an easy stroll on a circuit walk past amazing sandstone cliffs and cave formations, one complete with ancient Aboriginal rock engravings. It was again all too soon time to leave this amazing area but it is well and truly back on the list to return to, we have only just started to scratch the surface.

Moving further north for one more night camping at a very dry Yarrie Lake just outside Narrabri it was then a quick trip to Mount Kaputar National Park. It has been some time since we were here when we camped at Dawsons Spring near the summit and shrouded in fog. This time around the sun was shining and it made for a great morning tea spot. We were also able to visit the impressive Sawn Rocks again in the north of the park on our roundabout journey home.